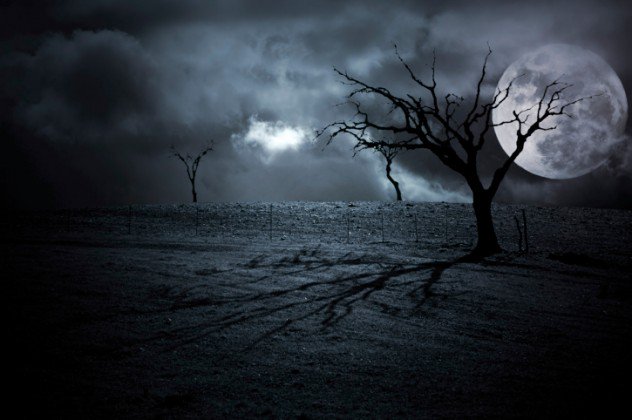 In my adolescent high school (and far more reckless) years, a few friends and I decided to mimic the many Ghost Hunter shows by visiting Indiana’s allegedly “most haunted” locations. We always brought a video camera with us in hopes to catch hard evidence of the paranormal . While our attempts were mostly unsuccessful, there was one time, on a Halloween night long ago, that something may have happened.

In Northern Indiana there exists a little town named Bremen. There’s not much to see there besides your basics ( a few gas stations, convenience stores, and a McDonald’s). But hidden deep in the surrounding cornfields lies a strange place known by the locals as “Little Egypt”. It’s a small cemetery located on a dirt road. There are no houses or lights near this location for miles.

Legend has it, that there was a farmer who owned the fields around “Little Egypt” long ago. He was extremely protective of his land, driving off everyone and everything that dared to venture there. One day, a caravan of Gypsies that was passing through the area, made camp on this plot of land oblivious of who it belonged too. The farmer rushed out to the Gypsies threatening all kinds of violence if they did not leave his land immediately. The Gypsies offered to pay the man if he allowed them to stay the night on his land. The farmer refused and became enraged.

The Gypsies packed up and left, but promised the Farmer since he loved his land so much and was unwilling to share it, that he would die there and be cursed to roam those cornfields alone for all of eternity.

That farmer eventually died and his body is buried in the “Little Egypt” cemetery. Some locals who wander into those fields to this day have claimed to see the haunting image of a ghostly old man who often chases trespassers away with a pitchfork.

On Halloween, the year after I graduated High School, myself and two friends piled into a Jeep and made the hour long drive from Warsaw to this cemetery to see for ourselves if the stories were true.

We were all raised Christian and we had just graduated from a Christian school, so we should have known not to play around with Ouija boards, but in our absolute foolishness, we brought one with us, complete with candles and everything. Not smart.

We arrived at the cemetery a little before midnight. “Little Egypt” was certainly a chilling sight to behold. There weren’t many tombstones left intact (most were broken in half). The few that remained shot straight up into the night almost looking like ghostly figure themselves in the hollow blackness. The whole place was fenced in with a six-foot high chain-link fence that sported barbed wire across the top. We discussed not even getting out of the car upon seeing the place, but noticed a small hole in the fence as we drove around. After ditching the Jeep far back in the thick darkness of the cornfield, we slowly made our way onto the farmers precious land.

After checking the place out, we found a smooth patch of soil near the center of the graveyard to set up our Ouija board. We all placed a finger on the indicator and waited, our breath hanging like fog around us in the cool night air. After making several jokes about a phantom farmer suddenly popping out from behind a tombstone and charging at us, we decided to call out to him.

We asked if there were spirits present that would like to speak with us. Nothing happened. We joked around some more and were about to leave, when suddenly the indicator began to wiggle.

While we were all busy accusing each other of moving it, it quickly slid over to the “yes” portion of the board. Again we were very skeptical. One of us asked if this was the ghost of the angry farmer from the stories. The indicator slid up and down around the “yes” portion as if to indicate that this was in fact, him.

Suddenly, it began moving all around the board spelling C-O-M-E J-O-I-N M-E.

Nether my friends nor I were taking any of this at all seriously. We simply assumed one of us was moving the indicator and playing a prank on the other two.

Then things got a tad darker as the indicator spelled on I-N H-E-L-L.

Even back during my secular days, this still struck me in a very uncomfortable place. The joke ended with the appearance of the word “Hell”.

We probably would have stayed longer, but a car began pacing up and down the road, probably wondering what three teenagers were doing in a cemetery at midnight with candles. We didn’t want to have the police called on us so we packed up and headed out.

Up until recently, I never gave that night a second thought. I assumed one of my friends was manipulating the whole thing. What I do know is that it was not me. Was that simply a prank, or something more? We may never know.

Any way you slice it, this story from my past demonstrates how many in the secular world feel about the supernatural. It’s something that is regarded as completely fictitious, complied of nothing more than superstitions and myths.

Far too often, Evil reality is used for our entertainment.

While nothing supernatural may have occurred on that night seven years ago, the results of simply using that Ouija board and calling out to the paranormal world could have been disastrous. Had there been any demons wandering those cornfields that night, this story may have had a very different ending.

We must always be cautious to distance ourselves from such things, even if it’s only being used for fun. Halloween is an excellent example of evil things not being taken seriously. While there certainly isn’t anything wrong with dressing up as Captain America and going trick-or-treating, I encourage you to keep an eye out for costumes, horror movies, and Halloween traditions that take things too far. Don’t risk opening a door to the demonic.

Remember, there really are things that go bump in the night.